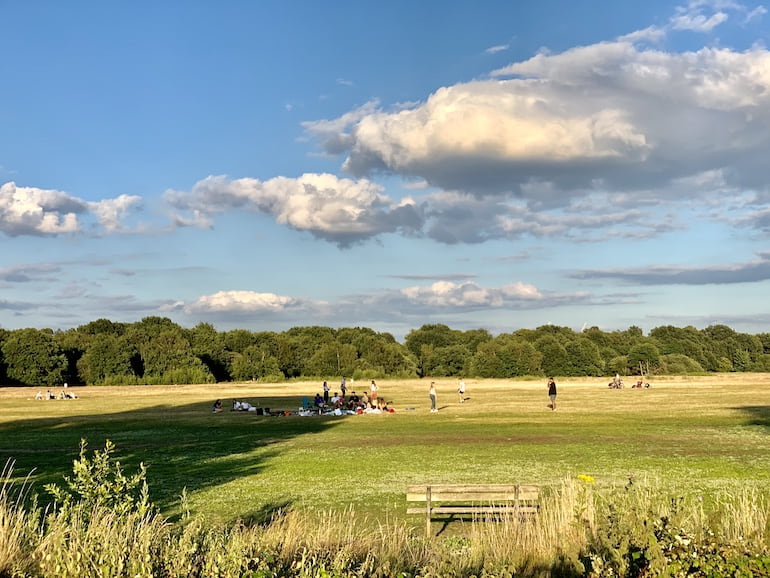 Commons are the lands owned by one or more parties, on which other individuals, known as “commoners,” have the right to use the land and harvest its resources.

The phrase common or common land is extremely deceptive, as it leads the majority of the general public to believe that it belongs to us, the people, while this is far from the truth.

In actuality, all common lands have always been privately owned.

Historically, it belonged to the Lord of the Manor and his heirs, and some individuals known as commoners were granted the right to utilize it.

The majority of London’s commons have a variety of natural components, such as trees, ponds, gardens, and expansive open green space.

You will be pleased to see the following biggest commons in London.

The area consists of 1,140 acres (460 hectares) of protected forest and common land, and is the greatest stretch of heathland in the London metropolitan region.

The Common offers once more a combination of beautiful natural scenery and several hidden gems and trails.

You will enjoy the big trees that will tower above you as you walk through them. It will truly be the most beautiful site to end your trek!

Observe the resident swans and other birds, or bring a picnic to enjoy by the lake. On the common is a Grade II-listed windmill that houses the Wimbledon Windmill Museum.

Blackheath is located in southeast London, between the Royal Borough of Greenwich and the London Borough of Lewisham.

It is one of Greater London’s largest common land regions, with 85.58 hectares (211.5 acres) of protected commons.

The heath is controlled by the boroughs of Lewisham and Greenwich. Close to the main entrance to Greenwich Park is the Long Pond (also known as Folly Pond) on the Greenwich side.

Three ponds are located on the Lewisham side, with Hare and Billet Pond being the most natural and likely the finest wildlife habitat.

The park is frequented by dog walkers, kids, and kite fliers – it’s typically breezy here – and hosts fun fairs, festivals, and the beginning of the London Marathon.

This grassy public park rises on one of London’s highest points, a sandy ridge stretching from Hampstead to Highgate and resting on a belt of London Clay.

The heath is undulating and mountainous, encompassing ponds, modern and historic trees, a lido, playgrounds, and a training track, and it borders the former mansion and estate of Kenwood House.

The southeast portion of the heath consists of Parliament Hill, from which the view of London is legally protected.

Along its eastern border is a series of ponds, including three open-air public swimming pools that were formerly drinking water reservoirs for the River Fleet.

A portion of Kenwood is a Site of Special Scientific Interest and the heath is a Site of Metropolitan Importance for Nature Conservation.

The hill is 98,1 meters (322 feet) in height and is renowned for its spectacular views of London’s skyline.

The skyscrapers of Canary Wharf and the City of London, as well as St. Paul’s Cathedral and other monuments, are all visible in one picture, portions of which are designated as protected vistas.

Explore the verdant wilderness of Hampstead Heath and learn why it is one of London’s most popular parks.

It offers some of the best views and highest points in London, especially from Parliament Hill, as well as bathing ponds, sports fields, playgrounds, and other amenities. Summertime lakeside concerts are also held there.

It is one of London’s largest and oldest public open spaces. Clapham Common was formerly “common land” for the manors of Clapham and Battersea, as stated in the renowned “Domesday Book” dating back to 1086.

Under the conditions of the Metropolitan Commons Act of 1878, what was once a common ground for the parishes of Clapham and Battersea was transformed into parks.

It contains 220 acres (89 hectares) of open space with three ponds and a bandstand from the Victorian era. Large Georgian and Victorian homes and Clapham Old Town are visible from above.

South London’s picturesque Clapham Common is ideal for a stroll.

Clapham Common is extremely popular with locals due to its various ponds and sporting amenities, including tennis and basketball courts, cricket nets, and a skate park.

Clapham Common’s bandstand is the largest in London and holds numerous concerts throughout the summer.

Tooting Commons are comprised of Tooting Bec Common and Tooting Graveney Common, which are located between Balham, Streatham, and Tooting in southwest London.

Since 1996, they have been entirely governed by the London Borough of Wandsworth, which has done so since 1971.

Between 1965 and 1995, the eastern portion of Tooting Bec Common was contained within the nearby London Borough of Lambeth.

For many years, the Wandsworth Parks Department wrongly referred to the two relatively different sites as Tooting Common; however, recent signage utilizes the plural name.

Tooting Bec Common, which is roughly 152 acres (62 ha), was one of the first commons that the Metropolitan Board of Works took action to maintain following the Metropolitan Commons Act of 1866.

Visit the quiet Tooting Commons for a stroll, birdwatching, or a swim. The commons are an oasis of flora and nature where you may observe bats, green parakeets, and woodpeckers in the spring.