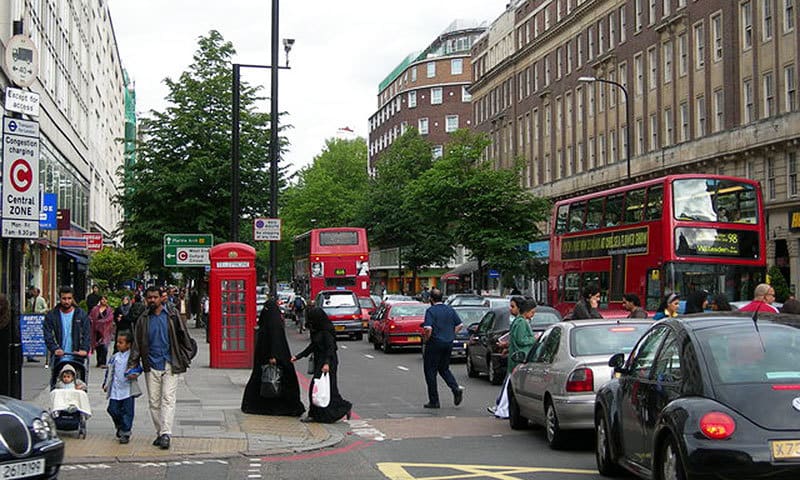 Edgware is a suburban community in northern Greater London that is located primarily in the London Borough of Barnet but also includes a tiny portion of Harrow.

With its own commercial district, Edgware is located 9.5 miles to the northwest of Charing Cross.

Up until the 1920s, Edgware was a village, and the high street’s row of half-timbered houses is a testament to that long past.

It is now a wealthy commuter town that attracts plenty of families, and it is simple to understand why. In this location, there are plenty of semi-detached homes. It’s safe, reasonably green, and home to good schools, but it’s also close to the Tube and night buses, making it simple and quick to travel into Central London.

The crimes that were reported in Edgware for the 12 months between January 2020 and January 2021 are listed below, along with their rates:

Is Edgware A Nice Area To Live In?

Today’s multi-cultural Edgware is home to populations of Jews, Christians, Muslims, and Hindus.

It is a well-to-do suburban neighborhood that draws many families due to a decent selection of schools, a lot of green space right outside their door, and a lot of roomy detached and semi-detached homes.

In Edgware, there are many homes that would be good for families. A major percentage of the homes are semi-detached, and there are also some huge, detached homes in the region.

Edgware has easy access to a number of parks and leisure areas, including Mill Hill Park, Moat Mount Outdoors Centre, and Edgwarebury Park. The neighborhood is traversed by Dean’s Brook and Burnt Oak Brook as well.

Edgeware and the nearby Barnet catchment area offer a wide range of primary and secondary school options.

32 of the 50 elementary schools in the catchment region, including The Annunciation Catholic Infant School, Barnfield Primary School, and Goldbeaters Primary School in Edgware, achieved an exceptional grade from Ofsted.

Every year, Edgware holds a variety of fairs, festivals, and small neighborhood events, such as the just concluded Kids Festival and the multifaith Winter Festival.

A wide variety of shops and restaurants can be found in the heart of Edgware. All of the necessary supermarkets, including Sainsbury’s, Tesco, Iceland, and Lidl, are located in Edgware.

Additionally, there are Asda and Morrisons locations close in Colindale, along with a variety of independent grocery stores.

An extension of the Northern Line (Zone 5) terminates at Edgware station, and Burnt Oak provides access to the line as well (Zone 4).

Jubilee Line access is available at Canons Park station (Zone 5). Local buses, including night buses, and the Night Tube service run frequently in the neighborhood on the Northern Line on weekends. The M1 and the M25 are nearby, and there are excellent road connections.

Is Edgware Safe At Night?

Even though Edgware Road is quite safe for evening strolling with children, keep little children away from the road because it is constantly busy and moving quickly.

Stick to locations close to major attractions in the late hours because there should still be a lot of people out. You could get into problems if you go off track and into strange shortcuts.

Even while Edgware is generally safe, it is not a good idea to go around at night, especially alone. Avoid walking alone but if you really have to, stay in well-lit locations. Avoid shortcuts, even if you believe they would save you time.

The Edgware tube station is not in a tunnel but rather in a cutting. It serves the cut-and-cover routes of the District, Circle, and Hammersmith & City lines, acting as their northern terminal for service to Wimbledon Station.

The Circle, Hammersmith, and City Lines share the same rails to Baker Street to the east of the station.

The Hammersmith and City Line splits off from the Circle and District lines to stop at a different station at the far end of Paddington mainline station, while all three lines continue to Paddington station to the west.

The Edgware station is pretty safe and it is well connected to the city center. It provides great access to all parts of the city.

Why Is Edgware Road So Arab?

The director of the Caabu Council for Arab-British Understanding, Chris Doyle, traces Edgware Road’s Middle Eastern links back to the 19th century when immigrants from the Ottoman Empire began settling in the city.

Waves of migration from the 1950s onwards brought immigrants from Egypt, Lebanon, Iran, and Algeria to the British capital.

“Edgware Road tended to be the area that Arab immigrants veered towards before eventually migrating out to more outer areas of London like Ealing, Acton, and others. It’s established itself as the epicenter of Arab and Middle East cuisine in London,” Mr. Doyle told The National.

As for the area’s foreign influences, the actual road itself, which stretches all the way to the outskirts of northwest London, was built during the Roman Empire.

“Edgware Road has added to the diversity of life in London, and the richness of the city both culturally and ethnically,” said Mr. Doyle, who works to promote a better understanding of Arab cultures in Britain. “I think London would be poorer without it.”