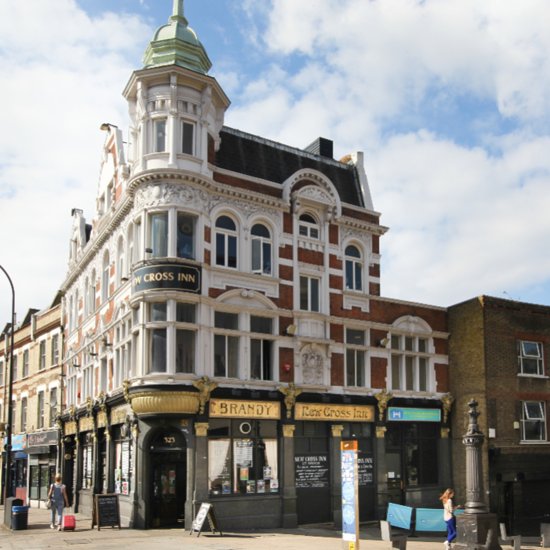 New Cross is a neighborhood in southeast London, England. It is located 4.5 miles south of Charing Cross in the London Borough of Lewisham.

Hatcham was the old name for the area (the name persists in the title of the Anglican parishes of St. James, Hatcham along with its school, and All Saints, Hatcham Park).

New Cross is located near Brockley, St Johns, Nunhead, Peckham, Deptford, Telegraph Hill, and Greenwich, and is the home of Goldsmiths, University of London, Haberdashers’ Hatcham College, and Addey and Stanhope School.

Deptford borders New Cross on the north, Deals Gateway on the east, Brockley on the south, and Peckham on the west.

According to a research from the year 2020, New Cross is the most dangerous place in Lewisham to live in, with 267 crimes reported in only one month.

During the day it is fine most of the time, you just have to be careful at night and try not to walk alone. Keep safety gadgets and don’t take expensive stuff with you when you are going somewhere you know isn’t safe.

What Is New Cross Famous For?

New Cross is a popular place to reside because of its undeniable artistic flair. It is a well-located part of South East London, with good transit access to Greenwich and Canary Wharf.

A visit to New Cross, especially during term time, may be enlightening because it is crowded with people who are breaking new ground in the realms of art, fashion, and design.

Many trendy hangouts, one-of-a-kind music venues, and community-minded pubs can be found in New Cross.

The region around Goldsmiths thrives because of the university’s prestigious artistic reputation, making it an ideal place to reside for creatives.

Many people think of London as a densely populated city with limited access to fresh air and open spaces. After all, it is known as the Big Smoke – but in New Cross, you will find greenery and fresh vegetation.

It is a place where you will feel calm in this always busy city. New Cross is mostly known for its greenery and amazing environment.

An easy stroll up to Telegraph Hill will reward you with acres of lush grassland and a breathtaking view of London, with the iconic Shard dominating the skyline.

New Cross, which is home to Goldsmiths, University of London — a world-renowned arts college whose alumni include Damien Hirst, Katy B, and Steve McQueen – has no shortage of culture.

One of the best things about New Cross is how easy it is to travel there.

Because of its proximity to central London, getting to New Cross Gate by rail from places like East Croydon or London Bridge is a breeze.

So even if you’re only passing through, you can jump on board, see what New Cross has to offer, and get back home all in one day.

For those who enjoy a drink, New Cross offers some of London’s top pubs, with a diverse selection of excellent boozers to suit all tastes and preferences.

There are not many nightlife options in New Cross, but there are a few good ones.

On a lazy day, the Amersham Arms pub is a calm area for a drink, but it becomes noisier in the evening when live music is performed. Another local favorite is the Rose Pub, which has a spacious backyard.

The Amersham Arms hosts young stand-ups looking to practice their craft and refine their act, and comedy evenings are common occurrences across London’s New Cross.

In addition, the New Cross Inn hosts a variety of live music events, and The Venue is a renovated movie theatre that hosts tribute bands.

Also, there are a lot of reputable primary and secondary schools in the area for families.

Is Goldsmiths A Safe University?

Goldsmiths is a prestigious academic and research university with a well-known arts and social sciences program, as well as some internationally renowned artists among its graduates.

Goldsmiths, University of London, according to new data, is one of the safest higher education schools in the metropolis.

According to a study of crime rates in neighborhoods with universities, Goldsmiths has recorded the lowest rate of incidents in London.

Based on official police data for burglary, robbery, violence, and sexual offenses, the Complete University Guide research looked at crimes that are most relevant to students.

According to the survey, crime is the tenth lowest in London within a three-mile radius of Goldsmiths, with 35.34 incidences per 1,000 inhabitants.

After analyzing crime near 28 institutions in the city, the study discovered that crime rose to 47.65 incidences per 1,000 people as you moved closer to downtown London.

Goldsmiths is a single-campus institution in the heart of New Cross, just 10 minutes by train from London Bridge.

Because of factors such as growing tourist numbers and different transportation hubs, the researchers agree that results for central London universities may be higher.

According to student reviews on Studyportals, the best place to find out how students rate their study and living experiences at universities all over the world, Goldsmiths, University of London is ranked 401 in the Times Higher Education World University Rankings and has an overall score of 4.1 stars.

Students also claim that they have not faced any inconvenience at the university and say that it is a safe place to study.

Which Borough Is New Cross?

New Cross is a district and ward of the London Borough of Lewisham in South London. It is about four miles south of Charing Cross. The London post town and the SE14 postcode district cover this ward. St Johns, Nunhead, Telegraph Hill, Brockley, Peckham, Deptford, and Greenwich are all close to New Cross.

Lewisham is regarded as one of Zone 2’s finest bargain districts. It is also a well-connected neighborhood. Lewisham has DLR access to Canary Wharf as well as excellent train connections to London Bridge.