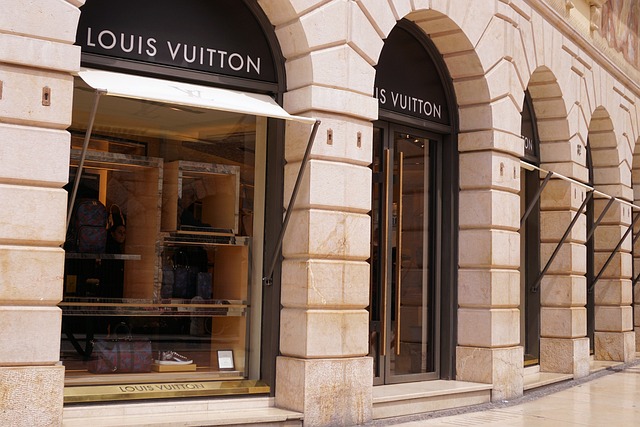 Louis Vuitton is the most famous luxury brand in the world and is owned by LVMH. The brand offers high-quality leather bags, wallets, luggage, footwear, wristwatch, jewelry, and other accessories.

The majority of these carry the LV monogram. It is one of the world’s most profitable brands, with profit margins exceeding 30%.

You may also purchase fragrances as they released their first fragrance in seven decades, and LVMH constructed a state-of-the-art fragrance plant to manufacture them.

There are not many brands that are so popular among both men and women.

Explore the most luxurious handbags and other accessories in their biggest store in London, located at New Bond Street.

Which Is The Biggest Louis Vuitton Store In London?

From 2001’s street art bags by Stephen Sprouse to 2013’s menswear incorporating prints by famous designers, Louis Vuitton has a longstanding experience of engaging with art and partnering with artists on products.

The biggest store in London located at New Bond Street, which reopened after a 14-month renovation, is a multi-story building featuring the work of 43 artists, which, unlike collections and paintings found in other stores, is designed to be viewed, rather than bought.

Peter Marino, an architect from New York, who designed the New Bond Street store and is something of a luxury-space tsar having worked on Vuitton’s overseas outposts and partnered with Chanel and Dior on their flagships, states that the face of retail is changing so rapidly.

The genius behind the transformation of the store’s interior and exterior wanted the biggest store of LV to look like a dream.

The front has a large blast of Louis Vuitton’s logo symbols in a rainbow of colors. You must have already seen this on your Instagram feed.

The store is a double-height gallery-come-shop that features 43 artworks by 25 designers, including one by their very own Tracey Emin and one by the famous American painter.

Even the double-helix staircase made of cerused oak stands as sculpture, slightly off-center and exquisitely lovely.

It is really essential for companies to have these massive distinctive statements in major landmark areas.

Moreover, the artistic director for men’s ready-to-wear and shoes at Louis Vuitton has created a colorful place for them on the ground floor below.

What Are The Opening Hours?

The Louis Vuitton store on New Bond Street transports customers away from the street and into their world via a short bridge.

The three-story luxury store houses both womenswear and menswear, as well as its wildly popular leather goods, jewelry, watches, shoes, and accessories, making it a shopping paradise with much more than just fashion.

The store is open seven days a week, but the opening hours may vary, which are given below:

London is now the most affordable place to purchase Louis Vuitton bags, wallets, and other goods. According to data conducted by Deloitte, the United Kingdom has the lowest dollar prices for various luxury items.

For instance, The Speedy 30 Louis Vuitton handbag costs around $800 in London, which is way less than what it costs in Paris, New York, or China.

The reason behind this is that it is related to the decline in the value of the pound, which has fallen more than 17 percent versus the dollar since June.

Bernard Arnault is the Chief Executive Officer and Chairman of Louis Vuitton, the leading brand of high-quality luxury products in the world.

He is supposedly one of the world’s most successful people. In fact, no one in the world of luxury goods is more accomplished than Bernard Arnault.

He began his professional career as an engineer in the construction business and was promoted to different executive management roles before being named chairman in 1978.

He has done everything to make his brand one of the best and his luxury goods one of the finest.

How Many Stores Of Louis Vuitton Are Present In London?

The luxury brand operates in more than 460 locations across 50 countries. In London, LV has various stores located on the following streets:

The biggest store among them is located at New Bond Street with such a lavish interior and exterior that one has ever seen.

The brand is hosted in the biggest shopping malls in various areas of London, such as in England, at Harrods, at Heathrow Airport, etc.

Where Is The Biggest Louis Vuitton Store In The World?

The Champs-Elysees location of Louis Vuitton is the company’s main store and the biggest in the world.

It is located at No101, on the intersection of Avenue George V and just opposite the restaurant Le Fouquet.

This magnificent store has an artistic interior and exterior, which retain its entire dome, and is a national historic landmark.

It is such a beautiful store with a spacious space to explore and roam around that can leave anyone’s jaws dropping.