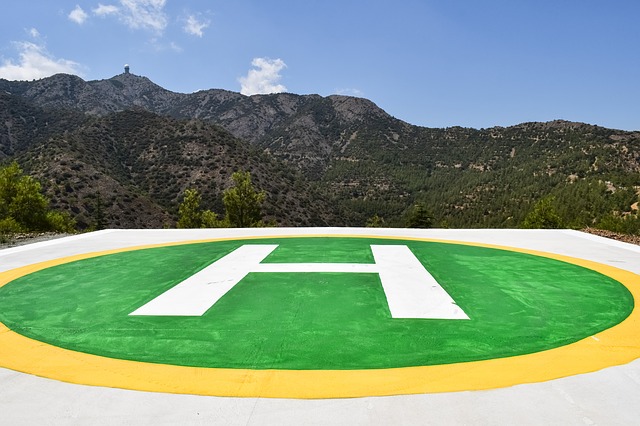 Holidays are meant to be relaxing but traveling from one place to another can be hectic.

Traffic congestion, late buses, or simply having your face pressed in the crowd can make your relaxation time very frustrating.

To avoid the hectic travel, many tourists hire helicopters to be flown immediately from their private aircraft upon landing, saving them a significant amount of time.

For instance, it takes roughly 23 minutes to fly 5 people from Luton Airport to London Battersea Heliport, but, if you’re lucky, it will take you closer to 90 minutes to drive.

But before hiring a helicopter, one should know sufficient helipads in the area. A helipad is a landing strip or platform for powered lift helicopters.

Since London is a gorgeous city with a stunning mixture of centuries’ worth of architecture, highlighted by the flowing Thames and abundance of greenery, there are many lovely spots that are ideal for sightseeing.

So finding helipads near your favorite locations can make your tour easier. Finding nice helipads in London is not easy but we have done all the research for you.

One of Europe’s most technologically advanced heliports, the London Heliport offers the utmost in user convenience and comfort.

The London Heliport has been providing VIPs, celebrities, and the business community with a vertical gateway to London for more than 50 years. It is conveniently situated on the south bank of the River Thames across from Chelsea Harbour.

It is the only CAA-approved heliport in the Capital with authorization to handle 12,000 takeoffs and landings annually.

Although parking is typically limited to smaller helicopter categories, the heliport offers landing, parking, and refueling services between 08:00 and 21:00 (flights are authorized between 07:00 and 23:00).

On the roof of The Royal London Hospital, is London’s Air Ambulance helipad.

It was made from the donations of thousands of supporters of the London Air Ambulance Charity.

The helipad area for the London Air Ambulance Charity is increasing the chances of survival for seriously injured patients throughout the city by speeding up the response times of the advanced trauma team.

Skyports, also known as London Vanguard is a small helipad on the Isle of Dogs, east of the City of London, close to Canary Wharf. Parking is limited because there is only room for two helicopters.

If a helicopter isn’t approved, it means that the helipad is too small and elevated above the water for it. Nevertheless, they have an Agusta 109 Power that is authorized to utilize this helipad.

The greatest database of off-airfield landing locations for helicopters is called Helipaddy.

The goal of Helipaddy is to enhance the helicopter industry’s use of information technology. The global community they serve naturally expands their special database of international landing pages.

Helipaddy is constantly growing thanks to the daily additions of adventurous heli pilots, heli-friendly company owners, and GA fans.

The London Docklands Heliport, run by Breeze Aviation, is situated on property within the Ford Motor Works in Dagenham.

The London Docklands Helipad includes a VIP lounge, a crew room, and a reception area. The crew room provides an internet connection for weather information.

Additionally, there is safe parking for roughly 50 vehicles, and the business provides a complimentary limousine transfer down to the helipad itself, a trip that takes about two minutes.

Up to three additional helicopters can be parked at the helipad, which currently has a tarmac landing pad with illumination for nighttime operations and is open until 19:30 on weekdays.

Elstree facility is available around-the-clock with advance notice and has everything to offer at a fraction of the expense of landing safely.

They work to make sure your stay is a success, from setting up Jet A1 fuel to assisting with subsequent travel into Central London and elsewhere.

The amenities at the helipad include free WiFi, hot drinks, flight planning, weather & chart services, a fully equipped kitchen, and pilot restrooms, all of which are accessible after hours if necessary.

It is perched atop the ten-story Ruskin Wing of Denmark Hill’s King’s College Hospital, which serves 4.5 million people in southeast London and Kent.The helipad has been in use between the hours of 7 am and 9 pm since it first opened in October 2016. Any trauma patients needing specialized care and attention outside of these hours have been transported by road ambulance to King’s.

King’s College Hospital will soon have a 24/7 helipad, making it the first hospital in London to accept patient flights throughout the night.

The Industrial Estate Heliport is located off Lombard Road/York Road, a significant thoroughfare on the south side of and running parallel to the river, behind the VW and Land Rover showrooms.

Thus, central London is easily accessible, and the A3 is also close by, providing quick access to the southwest.

Approximately 1,796 square feet overall are spread out throughout the ground and mezzanine levels of Unit 16 Heliport.

The heliport is a relatively modest facility that uses a jetty to create a helipad for takeoff and landing as well as onshore parking for three to four aircraft, depending on their size.

Former London Mayor Boris Johnson officially launched the St. George’s helipad on May 29, 2014, after it had been functioning since April 7, 2014.

There have been 1438 helipad landings overall, and five air ambulance companies have transported hundreds of critically ill or injured patients to St George’s.

New lighting has been placed on the rooftop helipad of St. George’s Hospital, allowing pilots to fly at night and view the helipad landing area clearly from a wider distance.