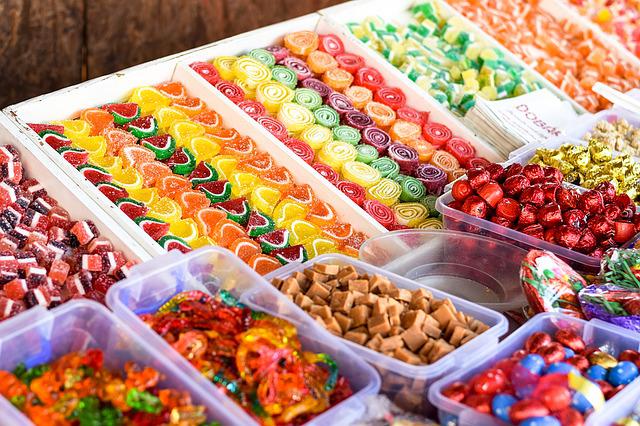 Since there are numerous American candy shops present in the city, they have to keep introducing new things and activities to lure their customers in because of the increasing competition.

Some American candy stores are mentioned below:

Sweetmix American Candy Store is a London-based company that specializes in offering American sweets and beverages.

For sweet tooths, they offer toffees, chocolates, and cookies, and to quench your thirst, they offer various beverages. They also have a large collection of halal treats and beverages.

At American Candy Co., you will come across a wide variety of famous American candies and goods. They are a small company but have the greatest deals on imported American chocolates, cookies, cakes, and sodas.

They offer well-known goods, such as pop tarts, Hershey’s candy, Oreo cookies, and much more.

Kingdom of Sweets was founded in 2007 and they are one of the biggest candy shops in the United Kingdom. They offer sweets and goods sourced from across the globe.

They have an extensive selection of American candies, sweets, cakes, chocolates, gifts, and all the items loved by kids. Their nostalgic goods are loved by both locals and tourists. Since their goods appeal to all generations, they are one of the most popular candy shops in the United Kingdom.

It is a store located on Oxford Street and offers American candies and goods.

Does The UK Have American Candy?

The United Kingdom has a large number of American candy stores, particularly on Oxford Street, London. Both locals and tourists are attracted to American candies. The abundance of candy stores suggests something greater than what is visible.

The busiest retail district in the United Kingdom is suddenly a sanctuary for those with a sweet tooth who enjoy American candy. Many massive candy stores with names like Kingdom of Sweets, American Candy Shop, Exit9 American Candy, and many other stores that claim to be the first of their kind can be found in a space of less than a square mile.

Nowadays, finding American candy stores doesn’t take too much effort. They stand out for their vivid colors, intricate designs despite having some of the highest retail rentals in the city, and interesting views like smoke and clouds to lure their customers in.

The delicious aroma of candies and nostalgic goods draws a large number of crowds inside the shops. However, there are many American candy shops that don’t do well on a regular basis, probably because of their expensive candies and bad marketing skills.

Why Are There So Many American Candy Shops In The UK?

A haven for individuals who adore American sweets has suddenly appeared in the busiest retail area in the United Kingdom. In a region of less than a square mile, there are numerous enormous candy stores with names like Kingdom of Sweets, American Candy Shop, Exit9 American Candy, and many other establishments that are claimed to be the first of their kind.

While these shops provide a wide variety of American candies, nostalgic goods, and beverages of all kinds, there’s more to it than what is shown.

According to many reports, these shops are being utilized to commit offenses against UK law and avoid paying business rates. This could be a reason why these shops are seen so frequently. This does not account for all the candy shops.

There are some candy shops that supply costly goods even when there is high competition and some shops have to settle for less. These shops are expanding even when hardly a few people buy from them. This might indicate an unusual activity going on.

Many American sweet shops supply costly goods, mostly located on London’s Oxford Street, where hardly a few people go now. The rates are exorbitant and all of the stores are fully staffed in this prime retail area. But instead of closing down, these shops are expanding day by day. There might be a reason that is both profitable and legitimate for these shops. However, this does not account for all the candy shops.

Business in London is very competitive and people struggle to make their ends meet. Expanding business while not being a popular shop suggests some unusual activities. This is the typical justification given by many reports. There are reports that say only a few candy stores serve commercially sustainable goods to people. Many shops on Oxford Street are believed to launder money and they are constantly being investigated.

In the end, authorities have little power to prohibit customers from entering these sweet shops and purchasing pricey goods.

To conclude, American candy shops are widely available in the UK, especially on London’s Oxford Street. American candies are loved by both locals and tourists. There is more to these stores than what is seen.

Numerous reports claim that these stores are being used to break UK legislation and avoid paying taxes. This might explain why these stores are so common, but not all candy stores are accounted for such unusual activities.