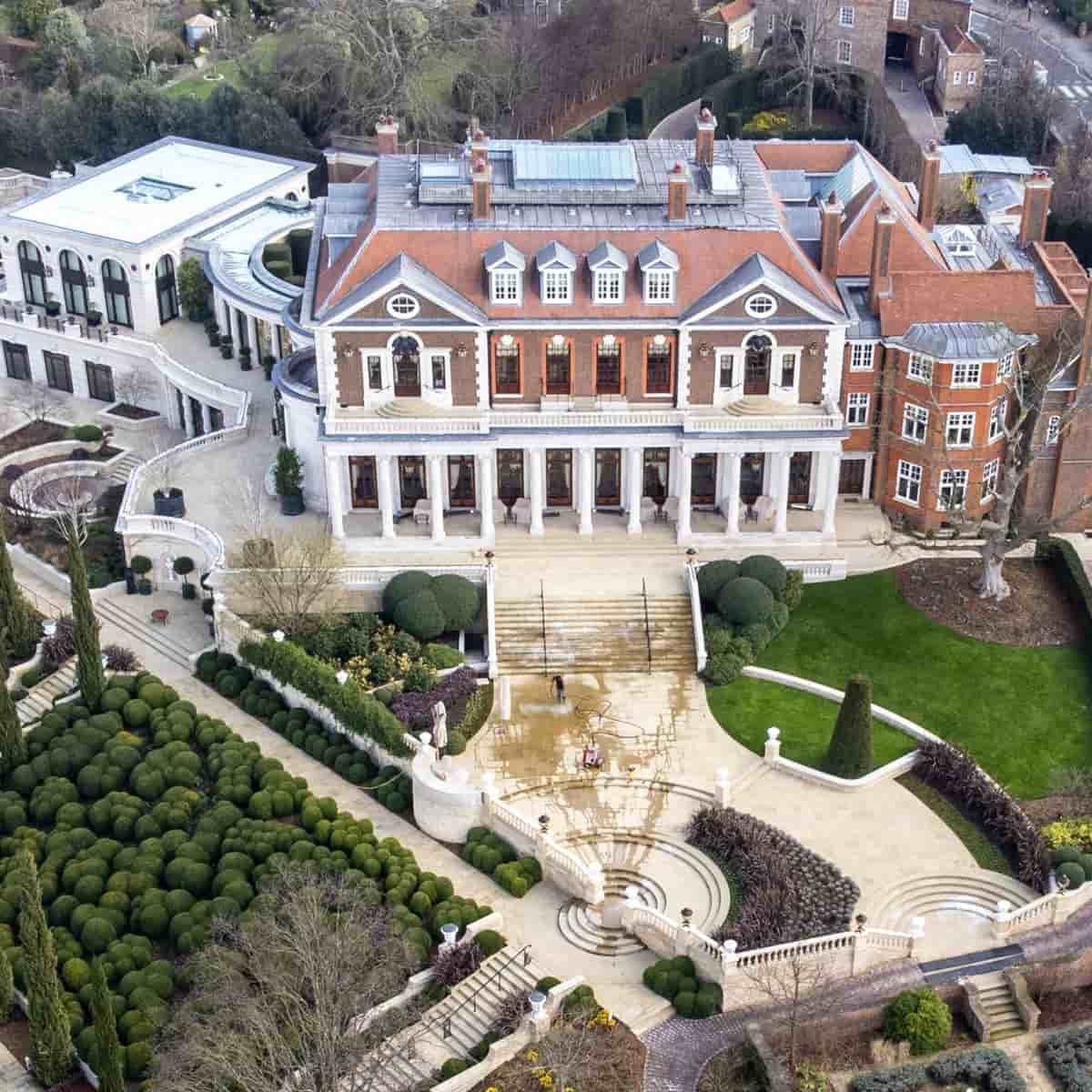 London is home to some of the biggest properties in the country, such as Buckingham Palace and St. James’s Palace, but there are also plenty of larger private and residential properties.

Despite the fact that mansions in London may be out of reach for the average first-time buyer, there are several buyers interested in purchasing properties like these.

A number of A-list celebrities reside in the capital of the United Kingdom and have the wherewithal to acquire one of the largest and most luxurious residences there.

Here are some of the biggest houses in London that will leave you stunned.

Witanhurst is a huge Georgian Revival estate from the 1930s that is listed as Grade II and built on 5 acres (2.0 hectares) in Highgate, North London.

It has been owned by a number of important individuals since being constructed by soap mogul Sir Arthur Crosfield.

As a result of its sale in 2008 to an offshore corporation owned by the Russian tycoon Andrey Guryev family, the building underwent a significant renovation following decades of deterioration.

Witanhurst is the second biggest private mansion in London, second only to Buckingham Palace. It reportedly costs $450 million.

It boasts wood floors and walnut wall panels with carved cornices that are decorated with gold leaf.

In addition to the drawing room, entry hall, study, and staircase, the majority of the bedrooms are decorated in a lavish classical style.

Other luxuriously designed rooms include the Chinese room, dining room, pool room, and gallery hallway. A three-fingered gatehouse provides entry to the property.

The owner is selling his 20 bedroom property in London’s elite Knightsbridge district for around £200 million.

This mansion was originally constructed as four townhouses in the 1830s, which were later united in the 1980s.

The house was previously owned by the late Saudi Arabian crown prince Sultan bin Abdulaziz Al Saud, who passed away in 2011 at the age of 83 as well as the late billionaire and former prime minister of Lebanon, Rafic Hariri.

This luxurious property boasts 11 bedrooms, an outdoor pool, and vast grounds. The arched front door leads into an exhibition area with dark floors and sculptures mounted on plinths.

There is a bar, a bowling alley, and a multi-level movie theatre. A tiled mosaic of Audrey Hepburn observes you as you shower, and the polished spiral stair railing was designed for sliding.

A 15,000-square-foot townhouse in the contentious Chelsea Barracks development has been placed for sale at £58 million, making it the priciest property currently in London.

The property is situated on the southernmost tip of Belgravia on the boundary between Kensington and Chelsea.

The seven-bedroom mansion features an in-house spa with a 12-meter pool and therapy facilities.

There is a a private garden, cinema room, a private garage, a roof terrace, a study, passenger and service lifts, and a separate luxury mews cottage for guests or lucky youngsters at the end of the garden.

This property, at 14,510 square feet, was just surpassed by the Chelsea Barracks townhouse as the largest and the most expensive central London residence for sale at $54,000,000.

It is a Grade II-listed townhouse in arguably the best address in town – Upper Grosvenor Street, off Mayfair’s Grosvenor Square.

With four floors and seven bedrooms, including a private gym, a private cinema, and a palatial games room, it’s unlikely that the new owners will ever need to explore the wonderful world of opportunity that stands on their doorstep.

It also has a swimming pool, a spa, a formal dining room with seating for 20 people, and a terrace, while the kitchen is the heart of the home, it is spotless and sleek.

This recently restored and remodeled early 20th Century building still displays the markings of its original design by Horace Field, a London-born architect.

This remarkable seven-bedroom, seven-reception, the six-bathroom mansion has been constructed by artists who have worked at Windsor Castle and The Palace of Westminster, lending it a royal air.

Downstairs is the spa, Jacuzzi, and gymnasium with a 10m swimming pool. The mosaic flooring of the pool is reminiscent of Art Deco’s design.

With views of iconic London sites such as the Westminster Abbey, House of Lords, and Big Ben, any new buyer will feel immersed in the city’s activity.

With a width of nearly 15 meters, this property quickly commands your attention due to its size. The stone columns and ornamental stonework flanking the entryway also contribute to a lasting first impression.